The headteacher and staff at Fairfield Park have been selected for a top role in supporting schools in challenging circumstances. 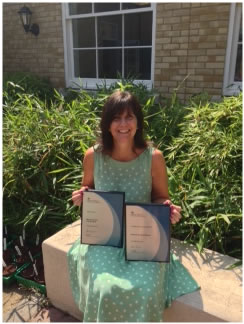 Mrs Stone is one of only 125 head teachers to be appointed to the role of National Leader of Education (NLE) in the 2013 recruitment round and she was the only primary headteacher in this role in the Central Bedfordshire Council area. This puts Fairfield Park Lower School in a pivotal position, representing and supporting outstanding practice.

She has attended formal induction and training for the role in driving school improvement. This took place at the National College for School Leadership's learning and conference centre in Nottingham. She is now commissioned locally by the Central Bedfordshire Teaching School to work with schools to improve standards.

NLEs use their success and professionalism as school leaders, along with the staff in their school - designated a National Support School - to provide additional leadership capability in struggling schools or those in transition to federation or academy status. The deployment is tailor-made to suit the needs of each school. The type of support provided is flexible and can involve NLEs becoming acting or executive headteacher of the client school or schools. They also have responsibility for bringing on the next generation of NLEs and National Support Schools.

Mrs Stone said: "I believe that being a National Support School and National Leader of Education will enable Fairfield Park to be forward-thinking in a climate of major change for the Education system, especially with reduced control at Local Authority and Government levels. I believe passionately in empowering others to succeed and lead and know that we have the skills and expertise at Fairfield Park to be outward-looking to support other Heads, leaders, teachers and support staff to also achieve success, improve pupil outcomes and life chances in their own local areas. Innovatively led schools that relish and constantly evolve and self evaluate their own practices will maintain and sustain their own standards in their own local area."

Many in the National Leaders of Education/ National Support Schools scheme see improvements in results at both the support and client schools with progress achieved in excess of the improvements nationally.

There are approximately 1,000 NLEs across the country and the role is strategically working with other schools to improve outcomes for pupils.

Maggie Farrar, Executive Director at the National College, said: "It's great that heads like Mrs Stone are willing to look beyond their own school gates to help more and pupils achieve. They should also be proud of their role because this scheme is at heart of our efforts to create a self-improving, school-led education system.

"School-to-school support is having a growing impact and the results speak for themselves with benefits for both the schools and academies being supported and those providing the support."